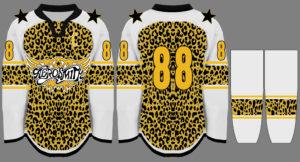 What do you get for your hard earned cash?

We put a lot of time in this and have a historical database. We start by giving every player a rating 1-15 based on our discovery. We also will have rating sheets at the rink so that you can rate players in real time as they skate. This will help with future Brawls if someone in under or over rated.

Rating 14-15= "The Rock Stars" - These players are upper C level or higher talented players. These high rated  players will be on the "potential ringer list" These folks are certainly welcome into Headbangers Brawl but must "get it " That this is not a ultra competitive, win at all cost, Tournament. It is based off of C & D level skaters having a tournament they can compete in. If they don't play a team game and skate within the "speed of the game" they can be subject to "the ringer rule" which will limit them to 1 goal per game or removal from the tournament without refund. Make sure you are here to have fun and party like a Rockstar!

Rating 11-14 = "Drummer" -Potential or Former Rockstar's - Very solid all around C level skater, just below Ringer Status or an aging Rockstar that can still perform.

Rating 6-10= "The Bass Player"- Every band has one of these and they usually don't stand out to much....Yep that is what this tournament is based on. Good fun loving hockey players that know the game and try to reproduce that on the ice. This group most likely plays on multiple teams and plays around a lower C / D level. There is a fine line between a 6 and a 10 so this will be the hardest group to rate, but also the largest group to rate.

Rating 1-5= "Lead Singer" -The Opening Act - No disrespect intended here but this group is either on their way up, "with no doubt all the best gear man can buy" or they are on their way down "with some true been there done that stories to tell".  Which ever way they are headed they are doing it with passion!

All players besides the Rockstar's will be placed in groups of 2 by the tournament based on their desired position and skill level. That will help balance the draft and speed up the process. If you wish to skate with a family member groups of 2 are the most we can accommodate.

The VIP players have already filled the first 3 spots on each team plus a goalie. The first round draft order will be based on the combined rating for all 4 VIP members.

Each Round we will re-seed based on combine team rating.

First Round - The Rockstar Round - Each team will choose a Rockstar for their roster. We will then re rank the teams for the next round based on combined team rating.

Second Round and Beyond - Group Round - Each team will pick any of the groups on the draft board until all groups are gone. We will re rank the teams after every round.

Here is the twist

The Fuck That Pass

***Sorry Rockstar's this cannot be used in the first round.***

THE INDIVIDUAL FUCK THAT PASS - With a 50 dollar donation to the Charity of Headbangers Brawl choice,  you can have the power to veto any team that drafts you and say thanks but “Fuck That”. That stops them from drafting you in that round and forces them to choose someone else. You can only do this once so group members need to have a plan.  If you use a “FUCK THAT “ pass, your group partner can not veto it. He or She is fucked. To use it all you have to do is yell it out or scream it out on the zoom meeting before the next pick is announced. Once you say it you are locked in to the donation. If you don't pay you will be tortured by a bunch of veterans with experience in waterboarding.

THE TEAM FUCK THAT PASS - With a 100 dollar donation to the Charity of Headbangers Brawl choice, you can have the power to block another teams draft pick, forcing them to choose another group. This is only good for round 2 and beyond. Only one "FUCK THAT " Team pass can be played in succession against the same team in the same round, however individual passes can be played at any time outside the Rockstar round. Once you yell it out your team is committed to the donation. You must agree among yourselves how to pay for it. Again, if you don't pay you will be tortured by a bunch of veterans with experience in waterboarding.

You have till the tournament starts to make your donation.

*** Trades are allowed at the draft with approval of both captains and the tournament director.***

VIP – tournament fee must be paid in full by all VIP members prior to getting assigned a team. Your team will consist of  3 skaters and a goalie. This lets you bring some skating buddies as a small core of the team. “These VIP spots typically sell out quick”

Deposit – 100.00 this gets you on the draft board and saves you a spot in the tournament.

Balance due – remaining tournament balance due two weeks after the draft. This date will vary and will be published by the tournament director.

*** In the case of a pandemic or natural disaster Headbangers Brawl reserve the right make moves to keep everything balanced and keeping teams competitive.***

*** Full refunds are allowed up till 30 days prior to the event. Anything within 30 days will be handled on a case by case basis based on a replacement player on the wait list paying for your spot. ***

*** You cannot sell your spot at any time for any reason or give your spot to another player. Work with the tournament director to help you if you need to cancel for any reason. ***

*** No Fighting! Yeah we are Headbangers Brawl but that doesn’t mean you can Brawl. Have Fun, Play hard, but cheap shots and fighters stay home. ***